Gym memberships, protein shakes, fitness clothing – it all adds up! But have you ever wondered how much you really spend on your health and fitness? In a survey conducted by Myprotein covering 1,350 Americans aged 18 to 65, the results show how much each state spends on their health and fitness habits.

The average American adult spends $155 per month on their health and fitness – that’s an average of $112,000 in their lifetime!

The tables below show the national average spend on the health & fitness categories we surveyed Americans on, broken down by lifetime and monthly spend. 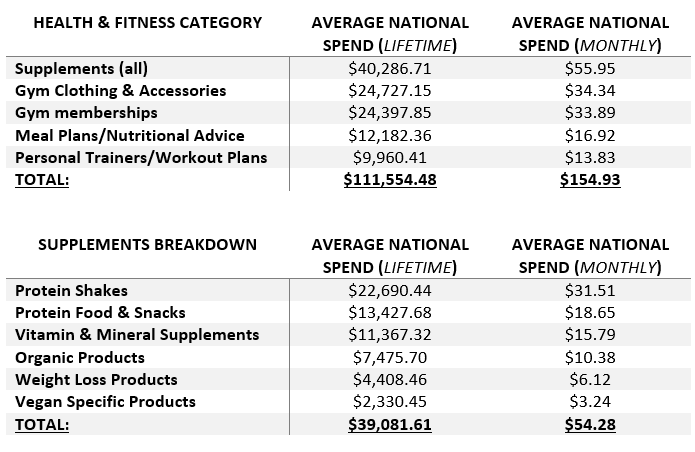 The graph below shows how Americans spend their money on the different health & fitness categories in our survey.

We surveyed US adults in 5 main areas relating to health & fitness and found that Americans spend most of their money on nutritional supplements (such as a protein shakes, vitamins, etc.), with the average American spending $56 each month on supplementation. In fact, over 60% of the population spends more than $40 each month on their supplements.

Supplements are the area where Americans are willing to spend the most cash, with a hefty 13% of US citizens shelling out over $100 on supplements per month!

With the majority of respondents prioritizing supplements above other areas of health & fitness, it’s no surprise that 97% of Americans admit to spending money on protein shakes every month.

Going to the gym is a firm favorite amongst Americans, with 87% of those surveyed paying for a gym membership each month.

In contrast, those surveyed are not as interested in paying for personal trainers or workout plans, with 66% of the population admitting that they don’t spend anything on this category.

Similarly, over half of US adults (55%) say that they don’t spend their money on meal plans & nutritional advice. Of those that do pay for meal plans, the majority spend $20 or less each month.

The growing popularity of taking health supplements over hiring personal trainers suggests that Americans are becoming more and more interested in a DIY approach to their health and fitness.

“Supplements have become a cupboard staple in many households as more and more people discover how convenient they are in maintaining a healthier diet. Protein powder, for example, is so versatile in how you can incorporate it into your favorite high protein recipes, and many companies offer vegan or “free-from” alternatives to supplements so really anyone can eat healthily these days.”

How much does your state spend on health & fitness?

Across the nation, our survey data shows that Americans spend the most on supplements, from protein shakes to vitamins and minerals, with an average lifetime spend of $40,287. On the other hand, Americans spend the least on vegan specific products, with the average US adult spending only $2,330 on vegan produce in their life. 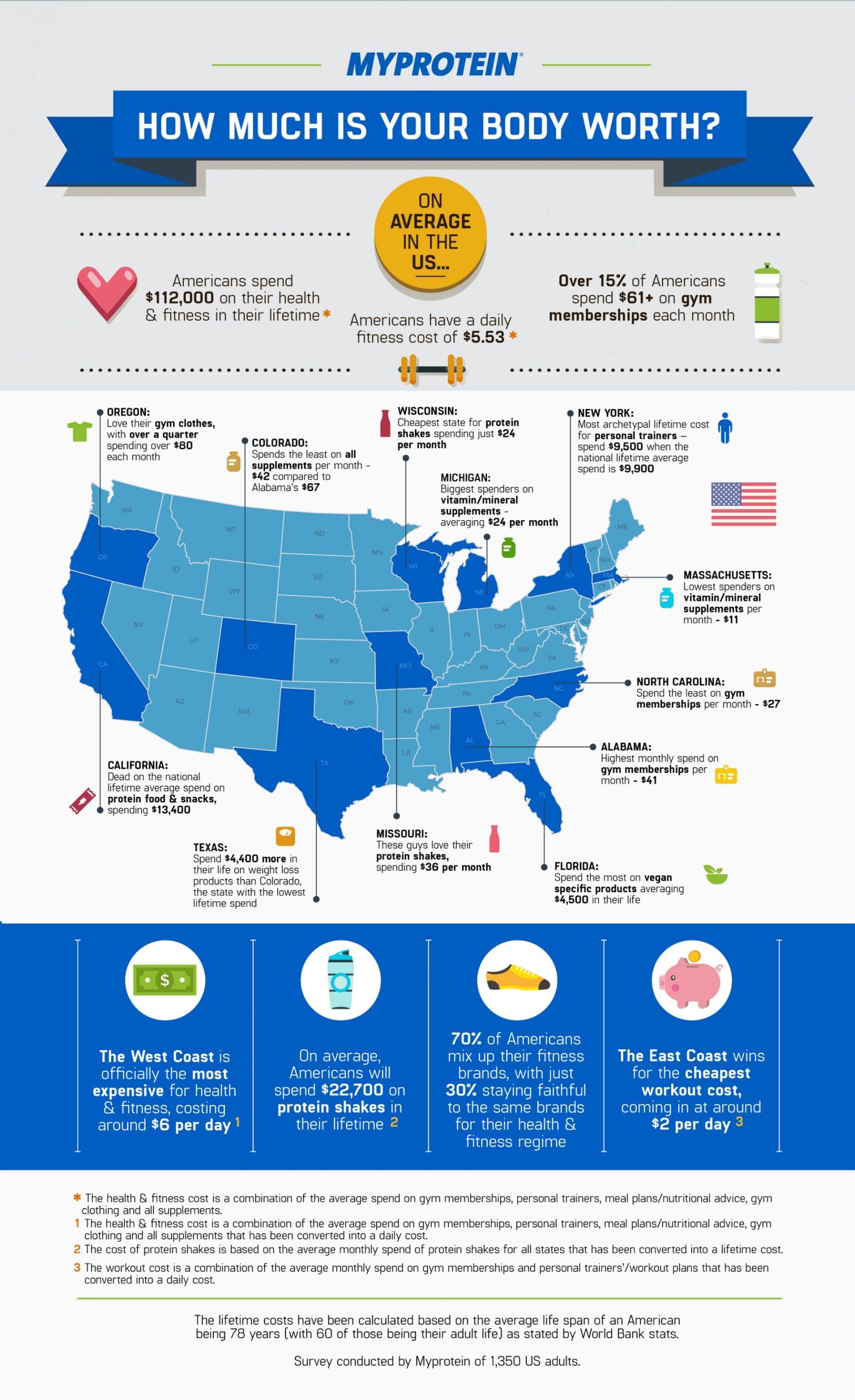 WESTERN STATES SPEND THE MOST ON THEIR HEALTH & FITNESS

Alabama’s lifetime expenditure on all areas of health and fitness (gym memberships, personal trainers, meal plans, gym clothing & accessories, and all supplements) comes in at $152,460, only $5,220 less than the national lifetime average spend on health insurance amongst 18 to 24 year olds ($157,680). [1]

Americans here love their supplements, with all our respondents saying that they will spend money on supplementation each month.

Arizona is the place to be if you’re vegan! Americans from this state are the most willing to spend in the higher price ranges for vegan specific products, with 5% of people spending more than $71 per month on vegan produce, which is 5% higher than the national average!

THE MID-WEST IS THE BARGAIN REGION OF THE US

The Mid-Western States are the bargain bulk region of the US with the lowest average lifetime spend on their health and fitness routine at $105,112, averaging $146 per month.

In fact, these Americans spend more money on their health & fitness than they do on their education! The average lifetime spend on an entire health regime in the Mid-West comes in at $105,112 whereas the average national cost for a public four-year college (out-of-state) is $98,440. [2]

Missouri doesn’t need any professional help with their fitness regimes! Missourians prefer to go it alone, spending the least on personal trainers or workout plans at only $5.17 per month and has the highest number of people who spend $20 or less on meal plans each month (31%).

Minnesota are the least interested in expanding their gym wardrobe, spending on average $23.34 per month on gym clothing compared to the national average at $34.34.

Wisconsin prefer to spend money on supplements over diet foods. They spend the least on protein shakes each month at $24.47 and have the highest number of people who don’t spend anything on meal plans (67%) or gym clothing (13%).

THE NORTHEAST HAS THE MOST PLANT-BASED BULKERS

The Northeast is the animal-friendly bulk region of the US, having the highest number of people spending $61+ on protein shakes (9 %) and who have a gym membership (93%), but also spending the most on vegan specific products, with a lifetime average spend of $2,950.

New Yorkers are quite traditional when it comes to keeping fit, having the highest number of people spending more than $100 each month on meal plans (9%) and the highest amount of people who own a gym membership (96%).

Gym memberships are so important to New Yorkers that they will prioritize spending on the gym over smoking. On average, New Yorkers will spend $24,699 on gym memberships in their life whereas the national lifetime expenditure on tobacco and smoking averages at $19,140. [3]

Massachusetts is a state of bargain hunters! 18% of those surveyed spend $20 or less each month on all supplements, they spend the least on protein foods at $12.73 per month and this state had the highest number of people that don’t spend anything on vitamins and minerals (32%).

Participants from New Jersey are hardcore bulkers! All those we surveyed from this state say that they spend money on protein shakes each month, and 89% of those in New Jersey spend up to $60 per month on gym memberships.

Pennsylvania has the highest number of people who spend over $71 on vegan products each month (3.3%), and 85% of Americans from Pennsylvania spend up to $45 per month on vitamins and minerals.

THE SOUTH IS THE MOST PREOCCUPIED WITH WEIGHT LOSS

Maryland is the most luxe state for supplementation, having the highest number of Americans that spend over $100 each month on all their supplements (20%). Americans from Maryland would rather be drinking protein shakes than alcohol, as the average lifetime spend on shakes in Maryland is $25,537 whereas the national average lifetime spend on alcohol (from age 21+) comes in at $24,795. [5]

Florida is the biggest spender on vegan products out of all the states, with an average lifetime spend of $4,414, thus exceeding the national average by $2,084.

Georgia prefer to get slim via weight loss products rather than by working out. Americans from Georgia have the highest average spend on organic products at $16.67 per month, but only 37% of the state spends money on personal trainers, with the majority of these spending less than $20 each month.

If you want to bulk on a budget, then Minnesota is the state for you. If you’re looking for more luxury in your health and fitness regime, then Oregon is your best bet! As more and more Americans take an interest in their health and fitness, it becomes increasingly clear that US adults are adopting a more hands on approach to their exercise and well-being, with many choosing to educate themselves about health and fitness by taking the “DIY route” to achieve a healthier lifestyle.

As a result, we can expect the US Health & Fitness Industry, which is currently worth $27.6 billion, to continue to grow over the coming years. This growth is potentially due to healthier lifestyles and more toned physiques becoming more fashionable, but also the need to combat the US obesity epidemic which currently costs the US more than $150 billion in healthcare costs annually.

The Psychological Benefits of Exercise

Protein Just Got Juicy | Clear Whey Is Available Now In US

Are Protein Bars Good For You? Healthy Or Hype?