The hamstring is one of three muscles creating the posterior chain of the leg. Along with the glutes and calves, the hamstring provides key bodily functionalities, muscular stability and symmetry, as well as contributing significantly to athletic movements and performance.

Whilst it is commonly just known as the hamstring muscle, the hamstring is actually comprised of three muscles. The semitendinosus, semimembranosus and biceps femoris all play vital roles in movements such as squats, walking, running and essentially any lower body movements, these are the muscles that bend the knee during movements. Meanwhile, the biceps femoris long head and semimembranosus extend the hip joint during movements. 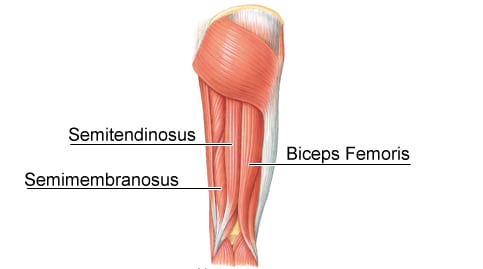 As you can probably guess by now, the hamstrings are key to aesthetics, performance and functionality. Whilst they were briefly mentioned in the foregone passage, detailed advantages of training the hamstrings efficiently include;

» Athletic Performance: Due to the fact that hamstrings play a key role in knee flexion and hip extension, they are pretty much essential for the running motion. Knee Flexion and Hip extension are also key in movements such as jumping, kicking, skipping and more.

» Body Balance: Muscles often work in pairs. For example, hamstrings with quads, hamstrings with calves, hamstrings with glutes. If they work well together, they work in a complimentary fashion. However, if one muscle is weak then this will detrimentally affect the other. This imbalance can lead to threatening injuries such as muscle strains and ligament tears.

» Injury Prevention: Due to the fact that the hamstrings in general are weaker than the quads and somewhat less developed; this can eventually lead to ACL ruptures and problematic injuries. The ACL is one of the four ligaments in the knee and works closely with the knee, quads and hamstrings. Developing the hamstrings will not only improve the Quad:Hamstring Ratio but it will also give an element of stability across the knee joint and reduce the ACL from becoming vulnerable to tears and unnecessarily physically stressed.

» Take a seat on the machine with your back placed comfortably against the pad.

» As you position your lower leg against the pad of the extended lever, adjust the lap pad so that it is securely holding your legs in position. The lap pad should be between the knees and the hip.

» Whilst your toes are facing forwards, make sure that your legs are levered in with the machine comfortably, but are also fully extended straight infront of you.

» Whilst breathing out (exhaling), flex your knees using just your hamstrings; this should pull the lever inwards. Continue to do so until the machine is pulled back far enough that it is almost hitting the back of your thighs.

» Ensure that your body is comfortable and stationary as doing otherwise could lead to lower back problems or hamstring strain.

» As the contraction is felt at the thigh muscle, squeeze and hold for a brief second before slowly eccentrically releasing back to the position you began with.

» Whilst you are doing so, inhale your breath as much as possible.

? Not Enough Stimulus: Due to the fact that the hamstrings are one of the largest muscle groups in the body, they should be hit with a crazy amount of volume! However, due to not being one of the ‘glamorous mirror muscles’ like the quads are, they get left with either the tale end of a workout or ignored and neglected altogether. In order to prevent this, be sure to apply a sufficient amount of exercises, sets and reps that will adequately stimulate the hamstring muscles, remember how important they are! If you have again found yourself neglecting your hamstrings, apply the priority principal. Next time you train legs, maybe start with hamstrings so that you are focused on them and have the forefront of your energy stores at hand to use for them.

? Quad Dominance: Leading on from the previous point, as previously stated, the hamstrings often get ignored and neglected; however, this time we will asses how it will result in unsymmetrical legs and quad dominance. Training hamstrings will give the overall leg the desired shape and proportions that most are after. If you are a bodybuilder or physique competior, a ‘Rear Double Bicep Pose’ or ‘Side Chest’ will never look complete if your hamstrings are lagging in comparison to the quads. However, if after the previously mentioned suggestion you are still struggling to combine quads and hamstrings into one workout, you can alternatively, create an individual session where you solely train and isolate the hamstrings, separate to the quads.

? Injury Rates: The hamstrings are one of the most commonly injured muscles in fitness/sport today. Due to muscular overload (when the muscle is unprepared and stretched radically beyond its range of motion or presented with a sudden stimulus), quad dominance/hamstring imbalances, failure to adequately warm up and inactive glutes (Glutes and Hamstrings operate together simultaneously); the hamstrings are vulnerable to become injured. To prevent this, it is important to train them frequently  as well as implying the following injury prevention methods; dynamically stretch before exercise and statically stretch after exercise, stay hydrated throughout training (One of the most common causes of injury and fatigue is dehydration), and apply hamstring injury prevention exercises (lumbar movements, bridges, swiss-ball curls and more).

? Not Targeting Each Muscle: As mentioned previously, three muscles constitute the hamstring muscle and as a result; each muscle should be targeted sufficiently. Failure to do so could lead to aesthetic disproportions, muscular imbalances and therefore potential injury likelihood. The semitendinosus, semimembranosus, biceps femoris head can be individually targeted with the following exercise methods. Lying leg curls will emphasise the outer of the hamstrings or more formally known as the biceps femoris head, whilst the seated leg curls will target the inner side of the hamstring (The Semitendinosus and The Semimembranosus). Be sure to combine both exercises during your next hamstring workout.

? Be Negative! An eccentric contraction or the negative phase of an exercise is the movement of a muscle whilst it is lengthening under resistance. Applying this method of eccentric work is known as eccentric training or negatives! Due to the fibres that make up the hamstrings, they are a muscle that react extremely well under the stimulus of eccentric work. The next time you perform the hamstring curl, aim to perform the concentric (inwards phase) explosively for 1 second, whilst you slowly perform the eccentric (releasing phase) for 3 seconds. Remember to squeeze at the point of contraction…And to buy a wheelchair for after the workout!

Are Abs Made In The Kitchen?

What Is The Mediterranean Diet? | Food List & 1-Day Meal Plan