As most of you know by now, a pre-workout supplement can be judged solely on how metallic the package is. No need to worry about actual ingredients, so long as you can find words like “EXPLOSIVE” or “PUMP” on the package.

But do you ever care to wonder what is actually in the container that you spend $30 per month on? I started to ask questions and do a little research when it continued burning a hole in my wallet despite the continuously wavering impact it actually had on my workouts. There was one common theme that came to light for a lot of products that are considered the top players in this industry: chronic under-dosage. 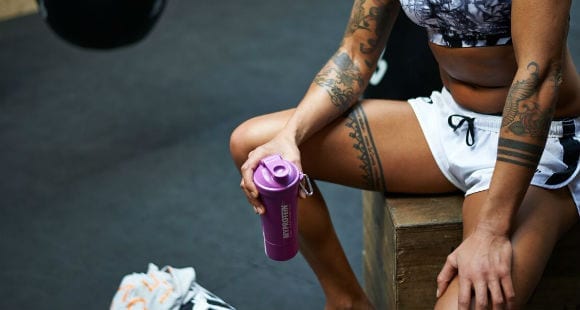 Now, to shed some light on this subject from my own perspective. At 24 years old, I’ve gone through my fair share of pre-workout supplements dating back to around senior year of high school. I remember being absolutely blown away by the first few products I tried. My heart was racing and my muscles swelled up as much as they ever had in the gym. There was definitely a certain euphoria that came with it.

However, over time, that feeling withered away and taking a pre-workout felt more like an obligation than a perk. It became almost a placebo effect, where I would subliminally convince myself I was not ready to lift optimally if I had not taken anything prior. It was less of a euphoric effect and more of a new normal. Of course, my solution to this was to switch brands…and then switch again, convinced the next one was the one that would break my plateau.

If only someone would have told me earlier that science could have such an impact on my gains.

After research, a handful of ingredients seemed to stick out as common denominators:

Now, this post isn’t intended to get into too much of the nitty-gritty of what these do scientifically, but let me give a broad overview of the common dosage and intent of each of these ingredients.

What Your Pre-Workout Supplement Should Contain?

This one shouldn’t elude anyone. It is one of, if not the most proven stimulants in general. Caffeine will give you that extra boost in terms of mental alertness and increase your energy level, which is going to be beneficial no matter what type of physical activity you are doing.

Many pre-workouts dose their product at a 200 mg level. As a barometer, an 8-ounce cup of coffee contains roughly 100 mg of caffeine. It’s important to remember that a tolerance can be built for caffeine, so being aware of your daily intake, in general, can help if you plan to take this prior to working out.

On the other hand, some people don’t need caffeine at all. Caffeine pills are usually sold in 200 mg capsules and are very cheap.

If caffeine is the most unequivocally effective supplement, creatine is a close second. It’s found in foods such as meat, fish and eggs, but you would need to consume unrealistic amount to acquire a significant amount. In layman’s terms, creatine is stored in your muscles and provides a regeneration effect for your muscles.

Supplementing with creatine will give your muscles more energetic capacity, which can facilitate muscle growth and power output among other things. Creatine comes in several forms, but creatine monohydrate is arguably just as effective as any and is also cheap. It’s typically taken in 3-5 gram doses.

The main selling point of citrulline-malate is that it’s going to increase your work capacity by virtue of reducing fatigue and soreness. It also can lead to an increased blood flow to the muscles, which can help you reach that elusive “pump”.

6-8 grams is a range that is commonly referred to. Also, this ingredient is bitter, so if you plan on using this as a raw ingredient, consider a flavor enhancer.

Although included in a lot of pre-workouts, beta-alanine appears to be probably the most optional of the four. Benefits generally aren’t attained until an exercise is done for at least a minute continuously (in a bodybuilding or powerlifting routine, that generally won’t be attained).

Beta-alanine is associated with that tingling feeling you get from taking a pre-workout supplement and is generally taken in doses of 3-4 grams.

Now, you may ask, if so many pre-workout supplements I encountered contained these ingredients, what is exactly is my problem with them?

Well, you see those dosages I mentioned at the end? Even if they excluded creatine and assumed you’ll pick that up separately, you’d peg the dosage of the average pre-workout around 10-11 grams at least, right?

Let me rattle of the dosage amounts of three of some of the more highly regarded brands that shall remain unnamed: 8g, 6.5g, 7g.

As a barometer, those are all just barely enough to be composed of the right amount of citrulline-malate you would want (which it likely isn’t), let alone the inclusion of the other ingredients I mentioned.

Unfortunately, a lot of these pre-workouts are made up of what are called “matrixes” or blends. The problem with this is that you do not know how much of each ingredient is within that matrix. As an example, one might have a matrix made up of a handful of different things, including beta-alanine, that they list at 5 grams. However, you wouldn’t be able to tell if beta-alanine makes up 3-4 grams of that matrix (the recommended dose), or if it makes up 0.25 grams of it. Also, watch out for ingredient dosages given in milligrams and not grams.

Not ALL supplement companies do this, there are a handful of respectable brands (including Myprotein’s MYRE) that will tell you what you’re getting dosed at. However, outside of MYPRE, most of the products I’ve come across that are more forthcoming also will be priced a bit higher (which makes sense, because they included the important stuff).

You don’t need to buy a pre-workout that has been labelled with ‘pump’, ‘intense’, ‘hardcore’ etc for it to be effective. The most important thing is the ingredients that it contains. These ingredients need to be relevant and in the right quantities, so always check the label. Of course, like with everything it is possible to make your own pre-workout but this can be quite a lot of effort.

What Are Abductor & Adductor Machines?

5 Ways To Avoid The “Freshman 15” This Semester

Is the Upright Row Bad for You?