If you’re a millennial looking for nostalgia or a member of gen-z in search of some fashion inspiration, today’s article is for you.

To celebrate our ‘90s themed Impact Week II we thought we’d reminisce about some of the best and most outrageous diet and clothing trends of the ‘90s. So, take a break from browsing our incredible sales this Impact Week and remind yourself of how we were eating and dressing in the ‘90s. 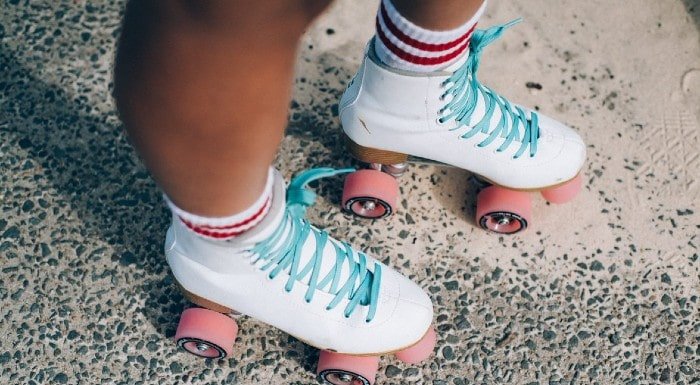 Ah, Dr. Robert Atkins. The man who started potentially the most notorious diet of all time – Atkins. The Atkins diet is high-fat, high-protein, low-carb and requires you to cut out a lot of foods in order to fit these macros.

Although Dr. Atkins developed the diet back in the ‘60s, it was popularized in the ‘90s with the release of his infamous book “Dr. Atkins’ New Diet Revolution”. And a revolution it was. The BBC reported in 2003 that 7% of men and 10% of women had tried the diet before, despite its strict nature.

Whilst we’re glad the Atkins diet seems to have been left in the past, there are a few similar diets floating around…we’re looking at you keto.

In ‘90s we graduated from the roller-skates of the 80s, to the much more sophisticated roller-blades, which just had one line of wheels instead of two sets of two…making balance more difficult but elevating any ‘90s look.

Whether you just needed a quick way to get around, or you thought you had a chance at becoming a pro, rollerblades were on all of our Christmas lists at one point.

We know we just talked about the high-fat diets, but there was another diet-culture lurking in the ‘90s, low-fat everything.

That’s right, opposing the high-fat, low-carb crowd were those who hopped on the idea that all fat was bad, cutting it out everywhere they could. This led to countless fat-free snacks, low-fat meal replacement drinks, pretty much any low-fat item you can think of. The fad was so popular that even McDonalds released the “McLean”, a low-fat burger which shockingly didn’t stick around.

Learn more about why fat is so important and how much you need per day here:

How Much Fat Should You Eat Per Day?

Is it really as bad for you as you think?

The ‘90s saw the meal-replacement shake boom with the US seeing a 28% increase in sales in 1990 alone.2 Celebrity faces were used to push the most popular meal replacement shakes, which promised weight-loss by having one shake for breakfast, one for lunch and “a proper dinner” according to a 1991 ad.

Meal replacements have come a long way since the ‘90s, and we’re definitely happy about it.

Unfortunately, there was another key player battling for our attention in the ‘90s, The Blood Type Diet. The idea behind it is that each blood type is better suited towards a certain type of diet.

Popularized by Dr. Peter D’Adamo in his book “Eat Right 4 Your Type” the diet doesn’t actually have much evidence backing it so we’re pretty glad it’s been left in the ‘90s.

Our nutritionist gave her thoughts on the Blood Type Diet here:

And why science says it's a fad.

Another common diet in the 90s was the Sugar Buster diet. The general idea of this diet seems to be relatively healthy, since it encourages against eating processed foods, but you can eat all the fruit and veg, lean red meat and dairy products that you want– as long as they don’t have any added sugar.

HOWEVER, the premise of this diet is ridiculous. It encourages you not to raise your insulin levels, because insulin makes you fat… this is crazy!

Believe it or not, this diet consists of cabbage soup! YUM. Luckily it wasn’t completely limited to cabbage soup, foods varied depending on the day of the week, to include fruit and other veg, and even red meat for one day a week.

The diet focused on rapid weight loss by encouraging followers to consume around 1000kcals per day. This isn’t the most sustainable way to lose weight, because it’s likely that you won’t be losing fat, but water. We do love an effective meal prep at the start of the week, but we’d rather not be prepping truckloads of cabbage soup.

Even though this ‘90s classic has already made its comeback, we’re still not convinced. It’s only redeeming quality seems to be its practicality, at least for the UK weather. Keeps the sun off your face, nice and sturdy even when its windy and (depending on your bucket hat of choice) can keep you dry in the rain. Otherwise, it’s a no from us.

Workout clothes used to be a lot more flamboyant, and we sort of love it. Arguably the best workout clothing choice if you want to keep a close eye on your form and very moveable with the high legs and a low back. So, it’s a yes to leotards from us, but we recommend leaving behind the tights and leg warmers.

The ultimate ‘90s basic was a good pair of cycling shorts. Paired with the biggest t-shirt you could find, a pair of leg warmers and some chunky trainers and you were good to go. We’re happy to give this trend the green-light as it’s a timeless classic, both in and out of the gym.

An essential ‘90s accessory and the height of practicality. You can fit all your essentials in a bum bag and they go great with a leotard. You can trust us on this one as ‘90s fitness king Mr Motivator said in a recent interview that he owns 500 bum bags of his own, that’s pretty impressive.

We’re not convinced on this one. If you’re not familiar, these are trackies come with popper buttons down the sides in case you fancy letting some airflow through. These also work brilliantly in ‘90s music videos to help showcase your dance moves, or at ‘90s costume parties…

We like to think that diet-culture and fashion have both come a long way in the last 30 years. Whilst we’re happy to see the return of some of our childhood favourites, we’re happy to leave some of the poorer choices in the past…mainly any diets that make us cut carbs.

Check out our amazing offers for Impact Week II and make sure to stay up to date with our latest events on our Instagram.

5 Exercise Fads That Died In The '90s

THE Plant Protein: An Ultimate Gamechanger For Pure. Plant. Power.

How to Plank Properly | Everything You Need To Know

Your Guide To Hybrid Training