There’s no escaping the fact that our lives have changed dramatically over the past few months. So, we decided to look into how this affected our health and to help determine whether we were healthier before or during lockdown.

We commissioned a YouGov survey of over 1500 Americans, looking into whether people were exercising more, eating more healthily, having trouble with their sleep, and what concerned people the most.

Over 200 Million Americans Were Exercising Weekly During Lockdown!

Many of us had far more free time than what we were used to, so it’s no surprise that Americans were exercising more. We found that 75% of Americans were working out during lockdown, with 63% doing weekly exercises. The Northeast, South and West were the regions that saw an increased amount of weekly exercising, compared to before lockdown.

It was clear to see that we were trying to form healthy habits during lockdown from the jump in searches for ‘Home Workouts’ and the reliance on online platforms. The term ‘workout’ saw a 155% increase in Google searches from April 2019 to April 2020. 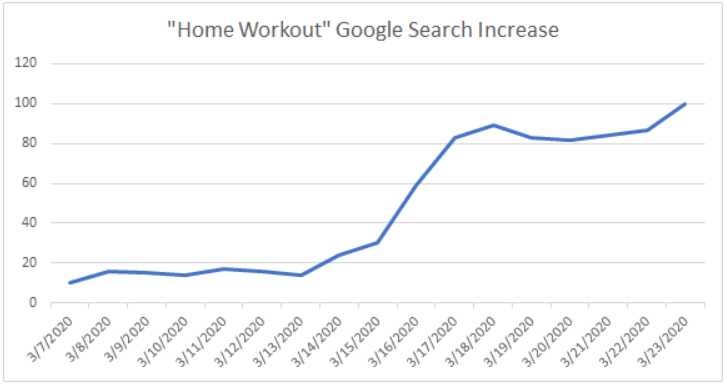 Nearly 1 in 4 said that they were getting workout inspiration from YouTube. The platform also saw a large shift in searches for the term ‘workout’ which increased by 224%, as we looked online for new routines that we could follow along from home.

The graph below shows how often we exercised during lockdown.

Missed The Gym? You Weren’t The Only One…

If you’ve been suffering from the gym blues over the past few months, we feel you. 75% of gym-goers said that during lockdown they missed at least one thing about the gym, whether that be the workout equipment, socializing with friends, or attending classes.

However, there were ways to keep on top of your health at home and many of us started searching for alternatives online. In fact, over half of gym-goers said they used Apps, specially made for exercise and workouts to keep spirits and motivation up.

The fact that 75% of gym-goers missed something about the gym just shows the demand and need for some home alternatives. As it turned out, we got pretty creative when it came to our workouts, but we still occasionally liked to rely on the old faithful dumbbells.

In fact, over 50% of American gym-goers admitted to using ordinary household items to help them workout whilst in lockdown. While 41% owned dumbbells or were even lucky enough to have their own cardio machine.

The Northeastern States Were Most Stressed About Health

Myprotein nutritionist, Jennifer Blow, adds: ‘Having had a concern about your diet during lockdown was completely natural. When we’re bored or stressed, people often find themselves reaching for snacks (rather than making something fresh and nutritious). This could have been having the time to learn how to cook a new dish or get into batch-cooking, so you’re never left wondering what the next meal is and snacking on the first thing you see. Know your cravings and plan your shopping around healthier ingredients and snacks – particularly those that are high in protein or fiber that will keep you feeling fuller for longer, such as nuts, eggs, beans, and other pulses.’

Breaking it down into regions. Our top worrier was the Northeast — nearly ⅔ had a concern — while the Midwest and South were the most relaxed regions in the United States, with 53% and 52% having had a concern. The West falls shortly behind the Northeast, where 58% had at least one health concern during lockdown.

The heat map below highlights which regions had the most concerns with their health. It appears the more southern you go, the more likely you were to have had at least one concern with your health. 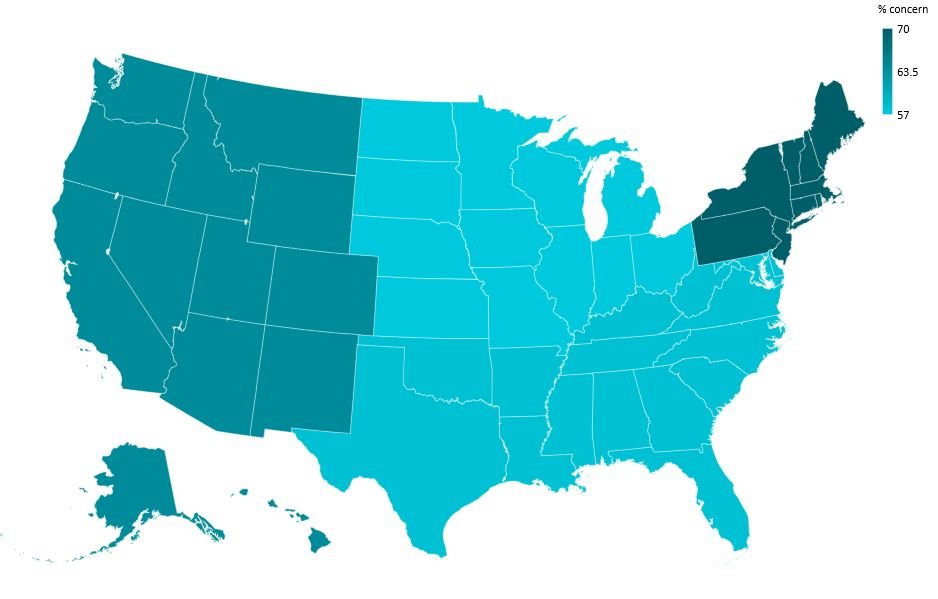 Splitting the population into age groups, those aged 55 or older said they didn’t experience any change, with 50% saying there was no change in their sleeping pattern.

From the Silent Generation to Gen Z’s, all ages found themselves getting more sleep during lockdown. Although the majority said that the sleep that they were getting was worse. 25-34-year-olds were the only age group to experience an even split of better and worse quality sleep.

In the South, 42% of Americans said that they didn’t experience any form of change in their sleep, compared to the Northeast where a massive 70% of Americans claimed to suffer from a change. 28% of these people also suffered from a lack of sleep quality.

When it comes to supporting our immune health, 1 in 5 Americans were taking more supplements in lockdown than pre-lockdown which helped keep their immune system in top condition. Delving deeper into this, just under 1 in 10 were taking much more than they used to, before lockdown. This comes at no surprise with the majority of us reporting to have had a concern for our health and wellbeing.

Did you see changes like this to your health? Lockdown affected many of us in different ways, whether that was getting a sufficient amount of sleep, exercising frequently, or ensuring you were on top of your recommended vitamin daily dose. So were we actually healthier whilst in lockdown?

As a whole, Americans ate more during lockdown, with the food being more unhealthy! Although this was made up for the amount of exercise we were doing, as a higher percentage of people were doing more weekly workouts than before lockdown.

Americans were also getting more sleep, however, more people said that their sleep quality had gotten worse since before lockdown. One thing’s for certain, people knew that looking after their own health had never been so important, as stats showed that more people were taking health immune and weight-loss supplements during the lockdown.

The 10 Realities Of Dating A Bodybuilder

Abductor and Adductor Machines | Do They Have Any Benefits?

Rapid Weight Loss | Why Fad Dieting Can Be Dangerous

Running For Beginners | 4-Week Plan To Get Into Running

15 Minute Workouts for Any Occasion

What Is Amino Spiking? Should You Be Worried?