Films and TV have taught us that after using cannabis, heading to the gym is probably the last thing on your mind. However recent research has suggested that the opposite might actually be true, suggesting a positive relationship between cannabis and exercise, and even possibly increasing motivation.1

These studies were conducted in US states where cannabis is legal, and of course here in the UK this kind of “pre-workout” is not an option. However, there have also been interesting studies into the effects of CBD on exercise, which is legal in the UK. So what did these studies actually find? 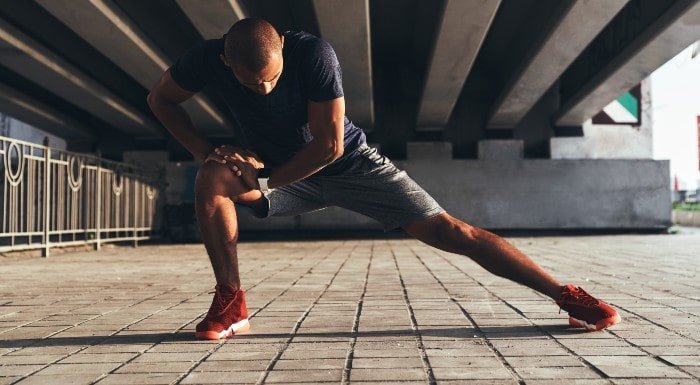 In 2019 researchers looked at 600 cannabis users in American states where the drug has been legalised and surveyed whether or not they endorsed cannabis usage before and/or after a workout.1

What was found was quite the opposite to the stereotype of the lazy smoker. The study found that over 80% of cannabis users endorsed smoking before and/or after a workout.1

The researchers controlled for any demographic differences in the participants like age and gender, and “use of cannabis with exercise was still associated with 43 more minutes of weekly aerobic exercise on average”1.

On top of this, it was also found that 40% of respondents who endorse using cannabis alongside a workout “met or exceeded American College of Sports Medicine’s recommendations of a minimum of 150 minutes of aerobic exercise per week” compared to less than 30% of cannabis users who don’t endorse it.1

Researchers also found that respondents who endorsed using cannabis before and/or after a workout said that doing so “enhances their enjoyment of and recovery from exercise, and approximately half reported that it increases their motivation to exercise”1.

The 2019 study sparked more research. So, this year a new study was conducted and its conclusions seem to consolidate what was found back in 2019.

This 2021 study aimed to learn more about the relationship between cannabis and exercise in US states where the drug has been legalized with the hope to inform discussions on legalization.

The study used data from the fourth and fifth waves of the National Longitudinal Study of Adolescent to Adult Health to inform their findings (a study that has administered questionnaires on health behaviors to the same representative group since 1994)3.

What does this mean?

In the US these studies are valuable to inform debates as legalization continues.

Of course, here in the UK cannabis is illegal – but cannabidiol, or CBD, isn’t. CBD is an active compound of the cannabis plant, but it does not have the psychoactive properties as it doesn’t include THC.4

A study in 2020 found that “CBD has been reported to exert a number of physiological, biochemical and psychological effects, that have the potential to benefit athletes”4
In particular, the anti-inflammatory properties could be incredibly beneficial to an athlete’s post-workout recovery.4

Having said this, the researchers stress that the conclusions of this study are preliminary, and a lot more research needs to be done in this area.

As cannabis is legalized in more states, it’s likely that we will get many more learnings and studies into its effects on health and exercise. Although much more research needs to be done across this area, there have definitely been some interesting developments that sit at odds with what we once thought cannabis did to our bodies.

Here in the UK cannabis is not legal, however CBD may pose some benefits particularly to your recovery, however, more research is needed and is likely on its way in this area too. And of course, there’s still always our trusty pre-workout to turn to…

How To Calculate Your Macros | 4 Easy Steps

5 Maca Benefits | What Is Maca Root & What Does It Do?

Is the Upright Row Bad for You?