It’s a debate that has yet to be conclusively answered when it comes to fat loss many theories have been proposed over time. Besides the basic understanding of energy balance and needing to burn more calories than you take in, fat loss has been mostly a mystery for those who don’t have the time or patience to count their calories and learn how to create a calorie deficit. Luckily apps and online calculators have made it much easier in the past few years but even then cardio is still a variable that is still debated over.

Some argue that the form of cardio doesn’t matter as long as you burn the proper amount of calories, while others swear by certain forms that can burn additional fat over time or even mobilize more fat during the cardio. In this article we will be talking about two common forms of fat loss cardio and which one is more effective in its ability to burn fat (which means its ability to help cardiovascular health or VO2 max/performance benefits won’t affect the answer).

This supposed accelerator of fat loss (known as low intensity steady state as the speed tends to stay low and consistent, also abbreviated as LISS) has been around for generations, being the cardio choice of Mr.Olympia bodybuilders back in the 70s up through to the present. Usually performed on a treadmill in the morning with an empty stomach, around 2-4 mph (3-6 kph), and at in incline between 5-10%. This form of slow and consistent cardio isn’t meant to get the heart rate up or strain the individual, it is only meant to burn calories.

The idea behind this form of cardio is that after a night of fasting your glycogen stores (when carbs are stored in the body for later use in the cells they take the form of glycogen) will be empty, and your body will resort to burning stored fat instead. Those against fasted cardio will bring up the fact that this form of cardio is very catabolic and along with burning fat it will also target muscle (something we definitely do not want to lose). This is why BCAA’s or more specifically Leucine (or even more more specifically HMB, a metabolite of leucine that is 20 times more powerful at preventing muscle breakdown) is supplemented before/during fasted cardio as this amino acid is able to prevent the breakdown of muscle (also know as anti-catabolism).

Over a 30 minute fasted LISS workout an average male will burn close to 250 to 300 calories. Doing the math, burning 300 calories with pure fat being the energy source (knowing fat has 9 calories per gram) you will burn close to 30 grams of fat. A pound of pure fat is 435 grams, which means it would take a little less than 14, 30-minute sessions to burn a pound of fat in theory. If it was really that easy to burn pounds of fat from our frame we definitely would all get to stage ready levels of leanness very quickly. While this looks good on paper and seems like it could lead to easy fat loss, there is one unfortunate flaw that can put a halt in this theory. While the glycogen stored in your liver will be mostly depleted overnight (your liver glycogen stores hold anywhere between 200-400 calories worth), the glycogen stored in your muscles (which have closer to 1,000-1,500) will more than likely not have fully depleted. This is a problem because stored glycogen is much easier for your body to release as glucose in the blood for fuel than having to tap into stored body fat which has to be converted into usable energy. So while you might burn a few grams of fat during a 30 minute LISS session, most of the energy will be in the form of stored glycogen from any food you ate the night prior. But what about low carb diets and not eating after 6 p.m. you might ask?

These diet strategies put simply will further deplete your glycogen stores, but unless you are constantly eating less than 100 grams of carbs per day your glycogen stores will always be slightly full before a workout. While you will burn slightly more fat as you have a much better possibility of depleting your stores during a cardio session, it more than likely won’t be as much fat burning as some guys in the gym might have you believe. At the end of the day, fasted LISS cardio in the morning is not inherently bad as it does burn calories, is easy on the body, and can be quite effective when done right (i.e. supplementing with caffeine, EGCG from green tea, HMB and yohimbine beforehand but that is a whole different article), but will not burn only fat and be able to compensate for a less than ideal diet. 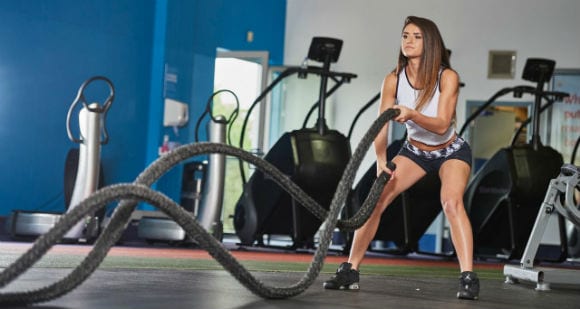 This form of cardio has been around for a few decades in the bodybuilding industry as well in the realm of athletic training, but has recently gained an acclaim to fame in the amateur fitness community as the next best thing when it comes to burning fat. High intensity interval training (usually abbreviated as HIIT) can be done with almost any form of cardio and involves bouts (or intervals unsurprisingly) of all out energy expenditure (usually anywhere from 15-30 seconds to even a minute), followed by about double the amount of time (anywhere from 30 seconds to two minutes) to rest with a much lighter intensity, done for multiple circuits usually lasting between 10-20 minutes.

This form of cardio is best done 30 minutes to a few hours after a meal or carb heavy drink as it would be very difficult to complete on an empty stomach and is meant to be done as intensely as possible to burn the max amount of calories. There is also the idea that the higher the intensity the more catabolic the cardio is, especially when you do not have time to sip a BCAA shake and should be breathing very heavily. HIIT has become very popular recently because of the so called “afterburn effect” which supposedly can help you burn more calories even after you’ve finished the workout.

Unfortunately though the amount of extra calories you will burn are quite miniscule, and are usually no more than 50 with the most intense of workouts, the amount of calories in a small apple or almost a whole oreo. At the end of the day the afterburn effect is not worth considering, but the sheer amount of calories you can burn doing HIIT (anywhere from 200-400 calories) in 20 minutes make it a very viable option for those who do not enjoy cardio but still have to do it for their goals.

At the end of the day, both forms of cardio will burn just about the same amount of calories when you add up the math. The amount of calories you burn after a HIIT session will lead to close to the same amount of extra fat loss you would get from doing fasted morning LISS. This is why personal preference will decide what you should be doing, as both can be effective. If you don’t enjoy high intensity work but have plenty of time at the gym then try some fasted LISS, or if you hate monotonous walking at a steady pace and like to get in and out of the gym then HIIT will mix things up and suit your preferences better.

Or best of all, you can do both fasted LISS on some days when perhaps leg day soreness will stop you from doing any high intensity running or on a day when you decided to sleep in and missed morning cardio you can make it up by doing some HIIT later in the day! All in all, there is no best or worst form of cardio for fat loss, only the forms that you can stick with and enjoy to reach your goals. Thank you for reading to the end and I hope you learned some valuable information.

What is L Carnosine?

What Would Happen To My Body If I Gave Up Caffeine?

The Scoop Episode 2: Can Vegan Athletes Compete With Meat Eaters?