Organic is a word that seems to be thrown around a lot lately. It has almost become a cliché in the fitness industry raising the popularity and demand of these “organic” foods. People are willing to spend up to 400% more on organic foods than the regular mass produced food items. We associate the word “Organic” with health and superiority but is it really?

For the most part, Organic consumers don’t even know what the definition of the word “organic” is nor do they know and understand the difference between the latter and its non-organic counterpart.

What does organic mean?

Organic is something that is derived from living matter. We often throw around this word without even knowing the true meaning of it. When referring to our food, according to organic.org, simply stated, organic produce and other ingredients are grown without the use of pesticides, synthetic fertilizers, sewage sludge, genetically modified organisms, or ionizing radiation. Animals that produce meat, poultry, eggs, and dairy products do not take antibiotics or growth hormones.

Sounds fantastic on paper however I wanted to critique these types of farms and see whether these products are actually worth increasing our weekly grocery bill. Like many people on this planet I found myself with the very expensive organic chicken breasts in my hands and asking myself: Is organic really organic? Seemed almost too good to be true so I decided to dive head first into plenty of research. 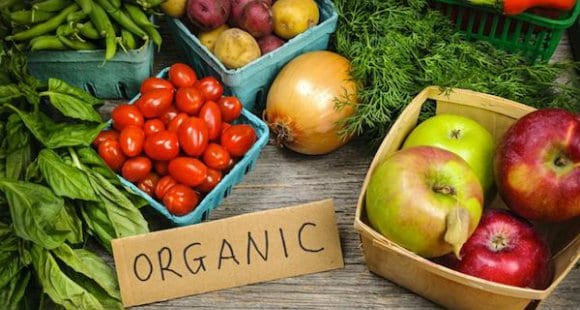 Are all organic products equal?

It is important to note that not all organic foods are created equal. Most people think organic is organic however, the information that lies on the front packaging will really differentiate the products. This is if you know how to decode the USDA’s classification system which has taken something as simplistic as a stamp and has turned it into a misleading clump of confusion.

If the package says 100% organic then this item is completely organic. The issue is that many organic products do not say 100% organic and this is where the surface begins to get slippery. All those products we see labelled “Organic” only contain a minimum of 95% organic ingredients whereas the remaining 5% are not organic. This is quite interesting since both of these products will carry the USDA organic seal.

The final classification that seems to get consumers to blindly lighten their wallets more than they should have is when products are labelled “made with organic ingredients”. The average consumer will see the word organic written in the smallest of fonts and will immediately deem that product is healthier and fully organic when in reality, this final classification only contains a minimum of 70% organic ingredients. The vast majority of organic consumers don’t know the difference between these classifications which is completely understandable without doing  thorough research. 78% of Americans consume organic produce which is a scary number considering many of them are being misguided by this very implicit method of classification.

What is organic farming?

Organic farming has become a trend within the farming industry which has led many conventional farmers to convert/dedicate a certain amount of their land to start farming organically. The issue here is that this process is very costly. That is only if it is done properly, of course. In order for a substance to be classified as organic, it must have been grown on soil that has not seen any conventional type of farming for a minimum of three years. This is a long time to wait for a farmer who is trying to make ends meet. Most farmers would just start growing their crops immediately so they can profit on the higher revenue organic produce provides ASAP.

Many farmers buy land in order to start an organic farm without knowing if there has been conventional farming in the past three years. This means that we can be consuming foods that are labelled organic or even 100% organic when in reality the soil they are being grown in is non organic and can be contaminated by the past usages of pesticides, herbicides, insecticides and many other harmful chemicals. Certain individuals would say that this is impossible because the USDA CERTIFIES these products, however they would be wrong because the USDA hires third party companies that will certify these farms for them. These certification inspectors will often go over some paperwork, bills and sometimes take a look at the farm however, according to CNBC, samples of the soil itself are very rarely taken for inspection and nor are the products themselves.

This means these farms are being certified organic. They are producing “organic” food that is rarely tested but have the highly coveted USDA organic stamp on the cover (keep in mind it is NOT the USDA themselves who certifies these farmers) to which we as the consumer spend large amounts of money to acquire. $39 billion worth to be exact in the US in 2016 This industry is growing exponentially, however there is not enough attention being brought to it.  “Sadly, we just can’t trust the organic label right now,” said Mischa Popoff, who used to certify organic farms. This is coming from someone who was working in this specific field/industry and is basically confirming that we DO in fact have the right to doubt as a consumer..

“We, as an organic certification agency, are required to perform testing for chemical residue in at least 5 percent of our operations,” said Jake Lewin, president of California Certified Organic Farmers. “We have broad discretion about whether or not we test finished products, whether we test soil or plant tissue.” There are 24 000 organic farms in the US meaning 5% of them is a very slim 1200! This would mean that 22 800 farms can go untested while still being considered organic. One consensus that most people can agree on is that buying local food is the best option available. The latter seems to be even more so pertinent when talking about organic produce because something deemed to be “organic” from a foreign country is not subjected to the same regulations as here in North America. Foreign produce may be better than the American organic, however chances are that you don’t get much better than the North American organic system/produce despite its several flaws.

Another issue would be that farmers pay these certification agencies in order to become certified. This means that if the inspector doesn’t certify the farm they miss out on thousands of dollars. In other words, this simply means that if they do not provide certifications they don’t take home any paychecks at the end of every week. How can this method be constructive towards the evolution of this industry if these farmers are actually paying for their own policing? If the government would pay these third party inspectors to certify/inspect these farmlands, they would be inspected more successfully and honestly. It would only make sense for these inspectors to have a fixed salary no matter what their final conclusions are.

This way they wouldn’t have anything to loose and they would be able to focus more on the task at hand rather than think about whether they will take home any money or not. It seems like the way in which this system was built facilitates corruption. The best scenario would be if the USDA themselves were to go certify every single farm.

I am not saying that every single farmer is corrupt or that they disobey the rules because the truth of the matter is that the majority will respect all the given guidelines. That being said, the problem with this organic system is that it is primarily based on honesty.

“When it really comes down to it, it’s an honor system,” said Zygielbaum, soil manager of a vineyard during a report from CNBC. In my house honesty is free and is not something we tend to pay for in the real world. The problem is that many individuals (not only Americans) are finding themselves to be paying up to four times the amount for “honesty” when all they asked for was Organic.

I always asked myself how organic farmers fought against pests and insects. I just assumed the elevated costs were attached to the fact that they actually didn’t fight with them at all thus ensuring the produce stays “Organic”. After doing some research I understood that organic farmers do try to combat these natural problems. The shocking part is that they do not exactly use “organic” means to attack these pests.

Thinking organic produce is Pesticide-free is an incredible myth and/or lie. Pesticides are actually allowed to be used in organic farming. Granted many substances are banned, but there are still many substances that are legal in the organic business. Some banned substances are actually allowed to be used if that so happens to be the farmers last resort. This restriction means that many farmers are using excessively elevated quantities of the so called “legal” substances in order to have the same effect as the conventional “banned” substances. This means the poison can lie among the quantity of product used and not the actual product itself.

According to genticliteracyproject.org the most used pesticide in organic farming (about 90%) is Bt (the bacterium Bacillus thuringiensis) which can attack the cells in our gut thereby piercing holes in our intestines. One insecticide that is also very commonly used in the organic practice is Spinosad which can cause irritation to us humans. Lastly Lime Sulphur was another popular fungicide used to protect crops that was fortunately banned in 2008 because it was capable of causing burns to our flesh. Six years ago, the USDA did a study on hundreds of organic products found in stores. The result, 40% of the products came back positive for pesticides. These statistics completely contradict the definition I gave previously regarding this topic however these are the lies the marketing departments of companies will get us to believe in order to fork out a little more cash.

Organic farmers do not want to use pesticides however the bottom line is that they have no choice but to hop on to this poisonous train. Determining whether going organic is right for you is not up to me however many of my original questions are now answered and I hope yours are too. It is, for the most part, more expensive and not as “clean” as most people would think. One thing is for sure, we must never include the words organic and pesticide-free within the same sentence. We must also remember that we can always wash our fresh produce (which is free) in order to remove a significant amount of pesticides off of our food.

Despite all the negative that surrounds this topic, organic will most likely be more beneficial to our health then conventional produce however there is one question every consumer must ask themselves: Is it really worth elongating your weekly grocery bill?

The Difference Between Auxiliary & Core Lifts

11 Benefits of Chia Seeds for Your Health

Food Calories Chart | What’s In Your Fruit, Veg, Meat And Other Daily Produce?

How To Do Handstands & Handstand Push Ups | Benefits & Technique