It’s that time of year — a new year and a whole bunch of new year’s resolutions. Perhaps the most popular area we like to focus on in the first few months of the new year is our health – from nutrition and diet, to training and exercise.

So, have you ever wondered how much time you really dedicate to your health and wellbeing? In a recent survey conducted by Myprotein covering 1,170 Americans aged 18-65, the results show how much time men, women, and different age groups really spend keeping fit and healthy. 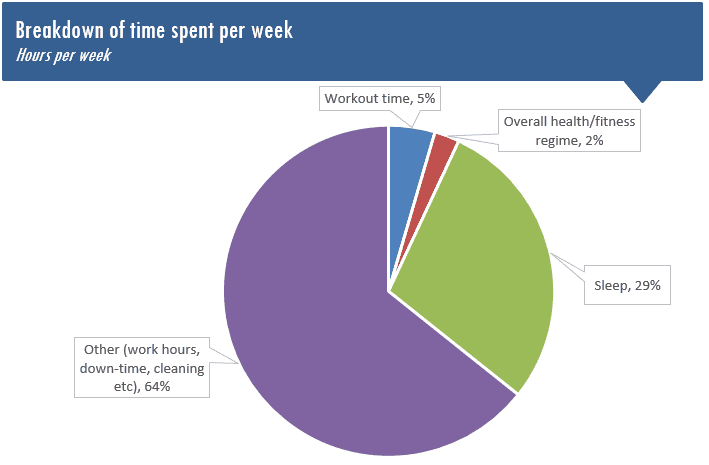 We asked respondents from the US about time spend in 5 key areas of a healthy lifestyle; overall health/fitness regime, working out, gym membership usage, sleeping, and gym equipment usage. We also asked about other increasingly popular fitness-related habits, including social media usage and average protein consumption.

So, which age group works out the longest? Do men go to as many gym classes as women? And who gets the most use out of their gym membership? Keep reading to find out!

Across the nation, our survey data shows that the average American adult spends 11.7 hours every week on their health and fitness regime (including workout time, warm-up/cool-down, meal prep, etc.) – that’s equivalent to 25 solid days every year spent solely on their health & fitness regime!

However, a large portion of our respondents go above the national average, with 19% of people spending 20+ hours per week on their wellbeing. That works out as a minimum of 43 days out of the year spent entirely on working out, stretching and meal prepping.

Across the US, most states agree on the average amount of time dedicated to their wellbeing each week. However, Washingtonians are the most invested in their health & fitness regime, with respondents from this state spending an average of 13.9 hours each week on their fitness routines.

It may come as a surprise that women spend longer than men on their health regime each week (12 vs 11.5 hours).

The graph bellows shows that respondents aged 36-40 are the age group that spends the least amount of hours per week on their health & fitness, averaging 9.1 hours per week. This trend is also apparent in our UK survey (figure 3), suggesting that middle-aged gym-goers are more focused on their careers and families than their wellbeing routine. 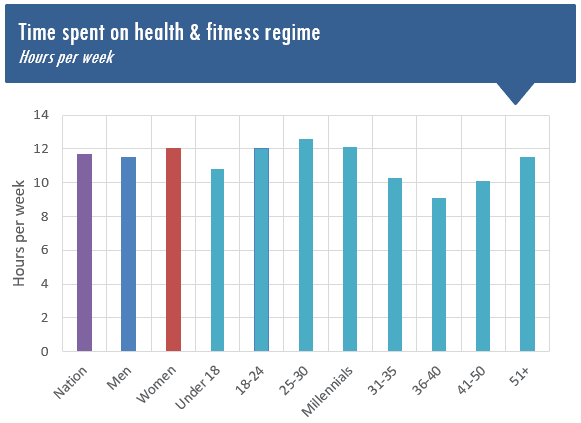 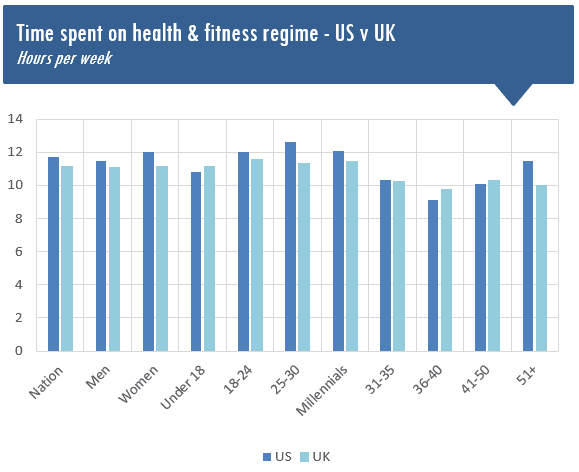 MILLENNIALS SPEND MORE TIME WORKING OUT THAN THEY DO SOCIALIZING WITH THEIR FRIENDS!

The results show that the average American works out for 7.6 hours each week, just over an hour each day! However, it’s women that spend more hours working out each week than their male counterparts (8 hours vs 7.5 hours).

The age group that spends the most hours working out each week are 18-25 year olds, averaging 8.5 hours per week – that’s 4 hours more than they spend socializing each week!1

When it comes to the number of hours’ that people work out each week, the majority of states agree with the national average. However, respondents from Oregon spend the longest time working out, averaging 9.3 hours per week.

Our results show that almost half of respondents go to the gym 5 times per week (47%). However, our survey also revealed that many of our respondents work out even more than the national average, with 43% saying they will work out more than 5 times each week. That means the average American works out a minimum 288 days out of the year.

Out of all the states survey, respondents from Iowa are the most avid gym goers with 64% of those surveyed from this state saying they work out 6+ times per week.

13% OF US ADULTS WASTE AT LEAST $21.75 EACH MONTH BY NOT USING THEIR GYM MEMBERSHIP

Out of those respondents who said they have a gym membership, the results show that the average American uses their gym memberships a respectable 5 times per week. That’s equivalent to using your gym membership 240 days out of the year!

Based on our previous health & fitness spending survey, the average gym membership in the US costs $33.83 a month. That means if you only go to the gym 1 time per week, you’re only using $4.83 of the amount you pay for your membership, meaning that $29 goes used every month.  In other words, every workout will be costing you $8.46!

Our survey shows that 13% of US adults use their memberships less than 3 times per week or even not at all! Based on the average monthly cost of a gym membership above, this suggests that these respondents at wasting at least $21.75 each month by not using their gym membership enough.

However, making an investment, in both time and money, has become a major priority amongst Americans with only 2.4% of our respondents saying they don’t use their gym memberships or only use them once a week.

Men More Likely to Use the Jacuzzi than Women

According to our survey, Americans love their heavy weights at the gym, with some of their favorite pieces of gym equipment being dumbbells, barbells and weight machines.

However, the gym isn’t just seen as a place to bulk up or lose a few pounds anymore. Many of our respondents now use it as a place to get a bit of R&R with 12% of respondents saying they use either the Sauna or Jacuzzi at their gym. 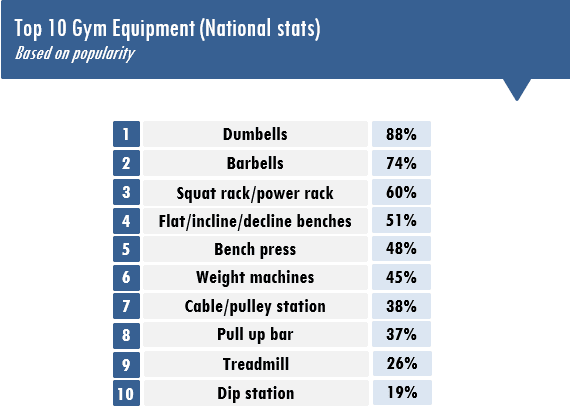 While the gym staples of free weights, benches and squat racks remain in the top 5 favorites for both men and women, our survey has revealed some interesting results about how the different genders like to spend their time in the gym.

It may come as no surprise that our male respondents use free weights more than their female counterparts, with 90% of men saying they frequently use dumbbells compared to 83% of women, 77% of men incorporate barbells into their workouts whereas only 63% of women say they use this equipment.

However, US men are also more likely to use the gym as a place to relax and unwind compared to our female respondents. Our results show that 7% of male respondents say they use the Jacuzzi or watch TV when they go to the gym, whereas only 4% of women use these facilities.

Although women are twice as likely to use the stepper than men (18% vs 9%), our survey also shows that our female adults are more interested in plyometric exercises, HIIT and suspension training than our male respondents.

Women use jump boxes/platforms and the TRX frame more than twice as much as their male counterparts (15% vs 7% and 8% vs 3% respectively). Our female respondents are also more likely to use battle ropes in their workouts than men (10% vs 6%).

The results also showed that women take more care of stretching out after a workout, with 24% of women saying they use a foam roller/recovery equipment post-workout, whereas only 18% of men say they do.

Despite conventional gender stereotypes of equipment usage at the gym, our results ultimately show that men and women are now using a plethora of different types of equipment when they go to the gym. So when you start your New Year’s fitness resolutions don’t be afraid to try out new equipment at the gym!

MASSACHUSETTS ARE THE MOST WELL-RESTED STATE

As well as ensuring you have a balanced diet and get a good amount of weekly exercise, making sure you get the recommended 7-9 hours of sleep per night should also an important part of your health & fitness regime.

Our survey results show that Americans get 6.9 hours of sleep per night on average. It may come as no surprise that those under 18 get the most sleep (7.7 hours) whereas those aged 41-50 get the least amount of sleep (6.1 hours per night)

Respondents from Massachusetts are the most well-rested, averaging the most hours sleep per night (7.4 hours).

Many people turn to sports supplements to help achieve their fitness goals. The most popular and well-known of these is, of course, protein powder.

Our results showed that American’s consume an average of 124g protein powder every day – that’s 865g per week!

It may come as no surprise that men consume more protein than their female counterparts, however the amount of protein they consume is pretty hefty, averaging at almost a kilo a week (919g). To put it into perspective, that’s like buying a 2.2lb bag of Impact Whey Protein every week – averaging $1,300 every year!

Myprotein Nutritionist, Jenny Blow, agrees with the importance of getting your daily protein intake, saying:

In today’s modern world of technology, health & fitness are no longer constrained to the gym or kitchen. Many people now take to social media, especially the like of Instagram, to document their fitness journey

According to an article on Jenns Trends, it takes 30-85 mins to do an Instagram post (57.5 mins on average), including posing & shooting, editing, and posting the picture.2

If you’re looking to nail down a new health & fitness regime this year, there are a few important things to remember. Based on our survey, aim to go to the gym or work out 5 times per week and get around 6.9 hours of sleep on average to ensure a solid basis for your fitness routine. If you’re serious about your health regime, try to dedicate 11.7 hours each week to working out, stretching out your muscles post-workout, and meal prepping delicious, healthy meals for the week. If you need some inspiration we’ve got loads of high protein recipes to get you started!

As a result, we can expect the US Health & Fitness industry, currently worth $30 billion to continue to grow over the coming years. This growth is potentially due to more and more people purchasing and consistently using their gym memberships, and gym life made increasingly popular and normal by social media fitness pictures, which could ultimately help promote a more inclusive fitness lifestyle for US adults across the states.

Victoria has a master’s degree in English Literature. She loves doing unconventional workouts like pole fit, which she’s done for the past four years. She’s also a passionate foodie, so in her spare time, you’ll find her trying out the newest restaurants in her home town.

Beta-Alanine for Maximum Performance | Benefits, Dosage, When To Take